Never Judge a Cigar by the Cigar Wrapper

We’ve all heard it. The darker the cigar wrapper, the stronger the stick. Right? “That cigar is really dark…it must be pretty strong!” Or more commonly from newer cigar smokers, “That cigar is light, it must be mild – I’ll have one of those.” Could those statements be correct? Of course, they could. Some dark cigars are stronger than others. These are your ‘full’ flavored cigars. Other cigars are light. These are your ‘mild’ sticks. However, it’s a common misconception that the color of a cigar’s outer wrapper dictates its strength.

You see, cigar strength comes from multiple factors: its wrapper, its binder, and its filler. The mix of those three ingredients is what made the cigar great, as in AJ Fernandez and Arturo Fuente famous! They’re also what will make a cigar fall into its mild, medium, or full category. That being said, a cigar wrapper accounts for a large majority of its flavor. Let’s talk about a few of the common wrapper types: Connecticut, the Habano, and the Maduro.

Golden blonde in color, Connecticut wrappers are quite popular for their mild manner and pleasant taste. These wrappers are also fantastic for beginner cigar smokers. Common brands making great Connecticut-wrapped cigars are Macanudo, Rocky Patel, and Montecristo, but there are thousands of others to choose from.

Ah, the Habano wrapper. The name ‘Habano” refers to the wrapper’s Cuban origins. All Habano wrappers are developed from Cuban seeds. Although, they are grown in numerous areas (Nicaragua and Ecuador are a few standouts). Habano wrappers are typically darker in color than Connecticut wrappers, and more robust in flavor. Often described as spicy, Habanos are full of flavor and complexity.

If you’re looking to move beyond your typical mild-medium cigar, give the Habano a shot. Habano wrappers give the flavor profile that’s closest to your authentic ‘Cuban’ cigar. They are also a very popular choice. There are plenty of fine Habano-wrapped cigars to choose from, such as those from Oliva and Padrón.

Finally, we arrive at the Maduro wrapper. These are the dark, scary-looking cigars you see sitting at the top of the humidor in your local cigar lounge. You cringe at the sight of them, but you shouldn’t! A ‘Maduro’ wrapper isn’t actually a type of wrapper, but rather the aging process that the wrapper goes through. Maduro cigars spend more time aging than the rest, which is why they have a dark, oily appearance. The leaves darken as the cigar ages and the oils are pulled out of the tobacco leaves. This gives Maduro cigars a rich flavor that’s often appreciated by seasoned cigar smokers. Since Maduros are aged longer than other wrappers, they can be quite mild and a real pleasure to smoke.

Remember, strength is a combination of factors, not just the wrapper. Next time you’re looking for a new cigar to try, don’t be afraid of the Habano or Maduro varieties – just be sure to do your homework! 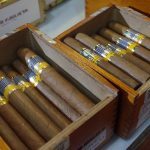 Are Real Cohiba Cuban Cigars Worth the Hype?General, Joy of Cigars, Legal, Travel 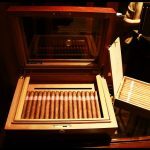 Your New Cigar Humidor and How to Care For ItCigar Fundamentals, General