How to Spot a Fake Cuban Cigar - Cigar Life Guy

How to Spot a Fake Cuban Cigar

For decades, there has been a market for counterfeit Cuban cigars. People can easily get duped as, on the outside, many of these Cubans look quite convincing. Some of them even smoke okay—although, if you know what you are doing, you can certainly tell the difference. Thankfully, there are ways to tell if your Cuban is legit. Here’s our guide to how to spot a fake Cuban cigar.

One of the easiest ways to tell if you are dealing with a fake Cuban cigar is if it’s unbanded. If your Cuban doesn’t have a band on it, odds are, it’s a fake. Un-banded cigars are often sold on street corners in Cuba to unsuspecting tourists. These, obviously fake, Cubans are hardly the main problem, as some fake Cubans come with counterfeit bands and even in counterfeit boxes. That is when it gets a bit more difficult to tell what you’re dealing with before you buy.

Signs of a Fake Cuban Cigar

The first thing to realize is that you are always more at risk for buying a fake Cuban if the cigar you are buying is expensive, and not actually purchased in Cuba. That’s not to say you can’t buy a legitimate Cuban cigar in the U.S. or online, you simply need to be more careful.

All real Cuban cigars are packed in boxes with what is called the Habanos Seal.

The Habanos Seal should always be present on the upper left-hand side of your cigar box, approximately 3 to 6 mm from the edge. It should also usually bend up to the front right over the center of the Cote d´Arms. The only time the seal won’t bend up like this and go over the Cote d’Arms is on very large cigar boxes. 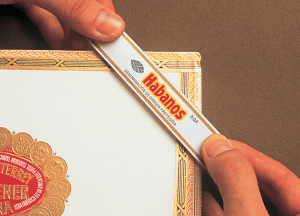 This is a common-sense tip that says your cigar box should look and feel sturdy and official. Also, inside the box, the Cubans should all be the same length and color. If the box looks flimsy or the cigars inside are different sizes or colors, you are probably dealing with a fake Cuban cigar.

The ‘Made in Cuba’ Stamp

All Cuban cigar boxes should have a ‘Made in Cuba’ stamp on their left. As of 2010 all of these stamps include a hologram. The hologram is an important thing to check for because they are hard and expensive to copy. Do not buy Cubans that are in a box without a hologram.

Bottom of the Cigar Box

Starting in the 60s, another change was made to distinguish real Habano Cuban cigars from imitators. To ensure authenticity, all you need to do is check the bottom of the Habano Cuban cigar box. Each box of legit sticks contains the hot-stamped words: Hecho en Cuba.

Then, in 1994, another stamp made its way to the cigar boxes. This new stamp read: Habanos s. a. Of course, the name of the cigar company was stamped after this. Before this, namely between 1985 and 1994, the name was simply Cubatabaco. Today, however, you’ll see the boxes marked as Totalmente a Mano. 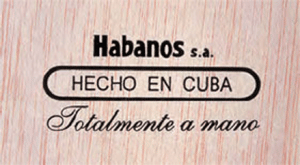 Finally, the stamp on the bottom of the cigar box should also include two ink marks. Think of it as a kind of secret code. These marks tell industry-insiders which of the country’s factories made the cigars. And the other number shows is the month and the year when the cigars were boxed (see below). 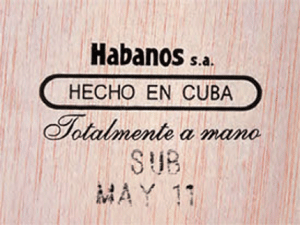 Some counterfeit sellers will try to sell cigars with more multiple multi-colored bands. This is a clear indicator the person you are dealing with is selling you a fake, as no real Cubans come with more than one band.

Aside from the specific Edición Limitada cigar, you should be wary of any kind of special edition cigar that is not sold to be a legitimate vendor. And, remember, the only way you can really tell if you are dealing with a legitimate vendor is if all of his Cuban cigars have all the already described markings! Don’t assume simply because a vendor has a nice shop or looks the part the Cubans he is selling you are authentic.

Know What a Real Cuban Costs

Fake cigars sometimes trick people by being too expensive or too cheap. In the latter case, sellers tell people they got a great deal for “X” reason and that is why their prices are so low. With overpriced Cuban cigars, potential buyers will basically sell themselves on the fake cigars by thinking that “well, it’s so expensive. How can it be a fake?”

You can do online research or talk to an expert to find out roughly what the different real Cuban cigars should cost. If, for example, you see a Montecristo No. 2 going for way less or way more than you know they should go for — don’t buy.

Unfortunately, you can’t do the ash test while your Cuban is still in the box, but if you can light and try at least one cigar before buying you should pay careful attention to how the cigar ashes. A true Cuban cigar should have grey or salt-and-pepper ash. If the cigar burns white ash, that’s a bad sign.

Do Not Buy Cubans in a Glass or Plastic Box

Cuban cigars should come in an all-wood box. If you see Cuban cigars sold in a partial glass or plastic box, they are probably fake.

The final difficulty with fake Cuban cigars is that some of the better counterfeits come in authentic boxes but are not actual Cuban cigars. Therefore, it’s always better to smoke at least one cigar before you buy. This is especially true if you decide to buy from an unknown seller. Sometimes unknown sellers can sell perfectly real, great Cuban cigars. You just have to know what a real Cuban cigar looks and tastes like in order to tell. If you don’t have that kind of experience, then you are far better off staying away from the back alleys and buying from a main-street seller who you know, and can prove, is legit.