How to Light a Cigar the Right Way - Cigar Life Guy

How to Light a Cigar the Right Way 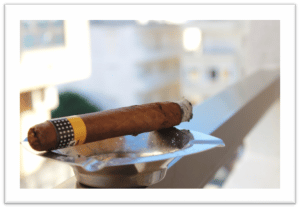 Unfortunately, it’s a sight that I see all too often. A good cigar gets destroyed by a case of runaway canoeing. In other words, the hard & uneven burning that can occur with an improper lit cigar. The unfortunate truth is that a surprising number of passionate cigar smokers were never taught the proper way to light a cigar. Call it a fluke, or blame it on the generation gap. But the ignorance has got to go. Whether you missed it the first time around or you need a refresher, here’s my take on the correct way to light a cigar.

A Matter of Distance: Lighting a Cigar Like a Pro

It all begins with the actual distance that you put between the heat source and the tobacco. That is, the lighter (or match) and the cigar. All the time, I see uneducated cigar smokers drawing the open flame back and forth across the end of the cigar. They’re waiting for it to catch fire. This brutish and ineffective at igniting an even burn. But, it also demonstrates a basic lack of understanding of how fire actually works.
Here’s the important bit: a flame is hottest at the top, not in the middle. So holding your cigar in the flame is exposing it to the lowest temperatures that the heat source has to offer. Don’t believe me? You should run this little science experiment before reading further.
As it turns out, high, directed temperatures are necessary for the best burn lines. For this reason, you want to position your heat source a few centimeters under the cigar. The flame should not actually touch the cigar. The idea is the air above the flame will be hot enough to ignite the tobacco without touching it. 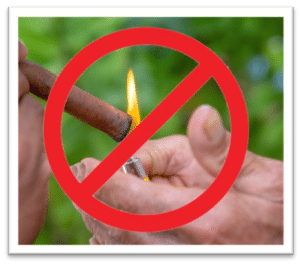 The real art of lighting a cigar comes in understanding the difference between scorching and toasting. Scorching is what occurs when you do not take your time. Instead, you try to light the tip of the cigar as fast as possible, holding the heat source too close, or puffing too harshly.
Toasting is all about gentle patience. By allowing the cigar to rest in the hot air above the flame, you give the tobacco a chance to warm gradually and even.

Rotate & Puff, Using the Band as a Gauge

The final step is ignition. Most cigar smokers are aware that ignition should happen on a rotation. Yet, few if any of them are paying attention to how the cigar is being rotated. By using the cigar band as a visual gauge, it’s possible to make exact, measured rotations with the cigar to ensure a great ignition.
Begin with the brand label facing upwards. Toast each side of the cigar for a few seconds, rotating by 90 degrees each time. When you’ve toasted the tip of the cigar, it will ignite with a little puffing. When a flame appears on the cigar, it is time to rotate, again by 90 degrees. Flame up, rotate. Flame up, rotate. This will lead to a very even amber line that you can check by blowing gently on the end of the cigar. If you did it correctly, this amber line will have a very small variance in one direction or the other. It’s the best indicator that you are lit and ready to smoke.

Cigars Are Works of Art: Summing It All Up

The premium cigar smoker will no doubt agree with my belief. A well-made cigar is no less a work of personal pride and artistic craftsmanship than other works of art, like paintings or wood carvings. The only difference is in the way that the art is being enjoyed. You wouldn’t hang a painting in poor light, so why let that premium tobacco burn improperly? With only a few extra seconds of patient ritual, you can eliminate user-caused burn issues and increase your enjoyment of cigars.
And if we have to mention it, it will also prevent you from looking like an absolute greenhorn at the lounge. 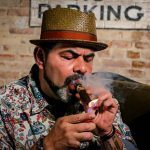 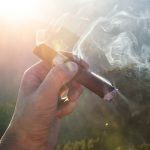