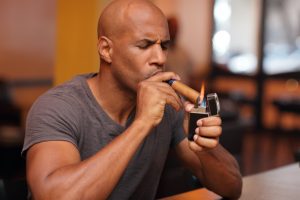 Okay! So here’s the deal, we aren’t going to actually go out to the store and buy you a box of cigars every month and send them to you….but with the money you will save on life insurance (since you’ll be getting non-tobacco rates even though you smoke cigars) you’ll have more than enough money left over to treat yourself to a box of your favorite sticks every month; maybe more!  Yes, the price difference between getting “tobacco rates” and “non-tobacco rates” on life insurance really is that big! So, in essence, it will feel like you’re getting a free box of cigars every month.

Here’s How It Works

Consider Bill, he’s 50 years old, a regular cigar smoker in “average” health and wants $250,000 in life insurance.  Bill will qualify for life insurance at “standard” rates.  Let’s assume he goes to “The Other Guy” that will place him with an insurance company that classifies his cigar use as “tobacco rates.” For a 20 year policy he’d be asked to pay $202/month*.  If he went with Cigar Life Guy who placed him with a company that treats cigar smokers as “non-tobacco rates” he’s be asked to pay $74/month* — a difference of $128/month – enough to buy a pretty good “free” box of cigars every month.

Let’s say Bill wants a “Lifetime” policy, one guaranteed to last for the rest of his life? “The Other Guy” would be $472/month and Cigar Life Guy would be $305/month – a difference of $167/month – an even bigger or better “free” box of cigars!

Sounds good? Fill out a no-obligation instant quote form and get information customized for your age, the amount of insurance you want, and the length of time you want it for.  Remember, if you only smoke cigars (no cigarettes, vape, e-cigarettes), check “no” to smoking/tobacco use on the quote form.

Want to learn more about how life insurance for cigar smokers works?

How Cigar Smokers Get Non-Tobacco Rates

Why Life Insurance is a Good Idea

How the Application Process Works